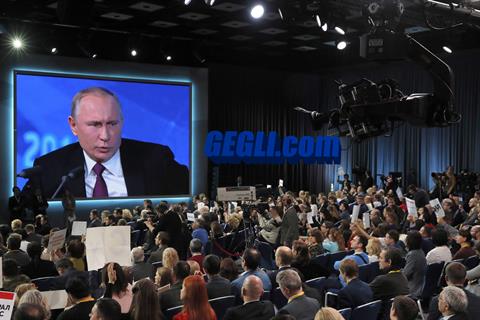 
The United States has threatened to suspend a war-hangover treaty restricting medium-range missiles, because one of the weapons of Russia violates the agreement.

Russian President Vladimir Putin warned on Thursday that the world would question the danger of a nuclear war and accuse the United States of endangering the risk of a global arms control crash.

The United States has threatened to suspend a war-hangover treaty restricting medium-range missiles, because one of the weapons of Russia violates the agreement.

Putin, referring to the Tramp government, said: "Now they are fixing short and medium barriers. What will be the future? It's hard to imagine how the situation will be. What if these missiles appear in Europe? "

However, many of those analysts have criticized President Donald Tamping, who have moved away from the INF contract. They argue that leaving Russia would not bring zero to zero, and could instead launch an arms race with ground-based nuclear missiles that has returned to Europe for decades.

On Thursday, Putin also said: "Negotiations with the United States have not been negotiated for a new START agreement, a separate treaty containing intercontinental ballistic missiles and other weapons. It will expire in 2021. "Are you not interested? Do not you need it Awesome, "he said.

And warned that nuclear war could lead to the destruction of the entire civilization.

"We know how to secure our safety, but in general, it is very bad for humanity because it brings us down to a very dangerous line, which is a very serious question, and it's a shame," Putin added. Which is underestimated ... We are now witnessing the collapse of the international nuclear containment system".

In March, Putin is proud that Russia has a new set of nuclear weapons that includes an intercontinental ballistic missile that makes defense systems "useless." In this speech to legislators and elites, he also accused the West of "ignoring us. No one listened to us. Listen to us well."

Approximately 1,700 journalists were approved for a news conference that runs the four hour sign at 8 am to 8 am.

The Russian president seems to have given Tramp's decision to withdraw US troops from Syria - nevertheless with considerable predictions.

"As far as the victory over ISIS, I generally agree with the President of the United States," Putin said. "We have made significant changes in the fight against terrorism in the area and we have put a serious blow on ISIS in Syria."

However, he also called for the US military to be questioned in the region.

The president added: "Is the presence of US forces necessary? I do not think so." "Do not forget that their presence is not legal. This is not allowed by U.N."

He continued that Russian forces were different because they were invited by the Syrian government.

Putin, as part of a turbulent tour of world troubles, was called on to protest against the "yellow vest" of France, suggesting that President Emmanuel Macro is blamed for the crisis because they intend to raise gas prices. He said that Britain should put "on the will of the people" over Brexit instead of trying to leave the European Union.

The Russian president also asked the Black Sea crisis this month that the Russian courts abducted and captured the Kirch's bait boats.

Putin acknowledged Moscow's previous claim that the incident was "provocative" by Ukraine to boost the popularity of Ukrainian President Petro Poroshenko before the March election.

"It's understandable that they are an electron," he said. "You have to intensify the situation to raise the current senior position," he said. "Was this successful? From the point of view of increasing personal privilege, it seems likely that Poroshenko's rank has increased."

Putin was also asked what would happen to 24 sailors detained in Ukraine who claim their state of war prisoners and should be released.

"There is research," Putin said. After the criminal case has passed, we will see what will happen. "

The Russian president also had dual standards for Sergei Scriplas, a former spy hijacked by Russia on the British soil, and the standards of Jamil Khshhugi, a Washington Post column who was killed inside the Saudi consulate in Istanbul.

Putin said: "Khoshuviji has been killed. It's all evident and well-known. Scripture, thank God, is alive. "

"However, there are still sanctions against Russia and non-stop talk about it, but in other cases, there is a complete silence, complete silence," he added. "This is a political and spiritual approach. This is one reason, just one reason for another attack on Russia."

Putin began a news conference with questions on the Russian economy, which will grow 1.8 percent next year after a period of difficulty due to international sanctions and oil price cuts.

On Wednesday, the US Treasury Department imposed a new boycott of Russia in response to the "failure to comply with international norms", which includes Moscow's involvement in the 2016 US election.