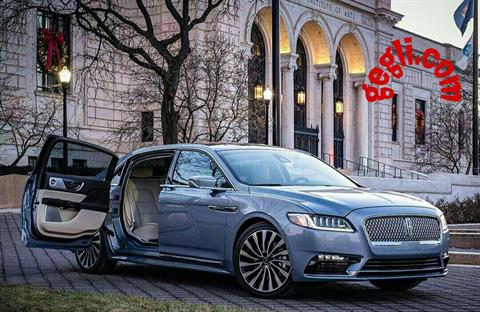 
The Lincoln Continental was introduced with inverters.

The Lincoln Continental was introduced with inverters.

On the occasion of the age of eighteen, the Lincoln Corporation will produce this special edition in conjunction with the Cabot Coating Company in a limited circulation of 80 machines. More will probably be made in 2020.

Engineers at Lincoln claim that rear occupants' footprints are among the best in the luxury sedan class.

The spacing between the axes of this particular model has increased by 15.24 cm so that the space required for larger fitting is created. This increase means more seats are rear row seats.

The caliques in this model are opened and closed at 90 degrees to allow passengers to ride and dodge in the most convenient way possible.

As people approach the car, the lights of the side mirrors and the rear doors are lit for greetings.

The opulent system will make the light appear underneath the mirrors and door handles when the owner approaches the car.

There is also a luminaire plate inside the rear pedal, on which car number of 80 is carved.

Container price Coach Door Edition has not yet been announced, but the PR manager of the company has priced about $ 100,000 for this car, which is about twice the standard version of $ 46,000.

This car looks no different than the doors on the other hand, but it's no different from the standard version, and it's just 15.2 cm in size.

Rear doors are 90 degrees open and come with electric systems to make it easy to get on board and take off.

Buyers can also order the Lincoln Black Lable service, including services such as car rental and carwashes free of charge. This particular version of the Continental will be marketed in the summer of 2019.

Lincoln's designers have created a new model for the 1961 Continental reminder.

The classic model was released to compete with Cadillac products, which was somewhat successful.

Classical Continental has already been featured in various cinematic films such as Matrix Triplets.