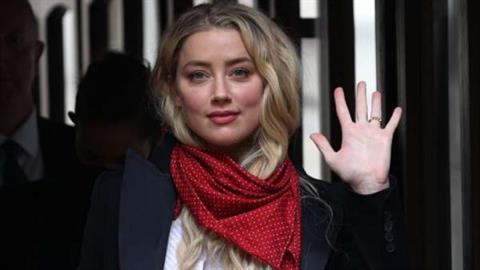 
Amber Heard has fired her entire PR team days before she is set to testify in court for her ongoing defamation trial against ex-husband Johnny Depp. According to reports, Amber took the drastic step after she was frustrated with the bad headlines about her in the press

New York Post revealed that she had switched to a new PR firm in the middle of the trial. A source told the publication, "She doesn't like bad headlines," while another added that Amber is "frustrated with her story not being told effectively." Johnny Depp's trial against Amber Heard began three weeks ago. The actor has sued his ex-wife for $50 million, claiming that she defamed him in a 2018 op-ed piece for Washington Post where she spoke about surviving domestic abuse. Johnny has already testified and Amber is expected to give her testimony later this week. Johnny in his testimony claimed that Heard's words cost him his reputation and the sixth film in the Pirates Of The Caribbean franchise. Meanwhile, Amber's lawyers have claimed that it does not amount to defamation as Amber did not name Johnny in the piece and wrote it in the larger interests.During the trial, Amber's reputation also took a hit when a voice clip featured Heard confessing that she too hit Depp during their fights. Last, Heard's credibility as a philanthropist also took a battering when it was claimed that she had not donated her $3.5 million divorce settlement to charity - something she had promised publicly to do. For the unversed, the American trial comes less than two years after Johnny lost a libel case against The Sun, a British tabloid that had labelled him a "wife-beater" in 2019. A London High Court judge ruled in favour of the paper and said that Depp had repeatedly assaulted Amber and put her in fear for her life. Notably, Johnny and Amber got married in 2015 after meeting during the shooting of The Rum Diary. They filed for divorce within a year. Their divorce was finalised in 2017.