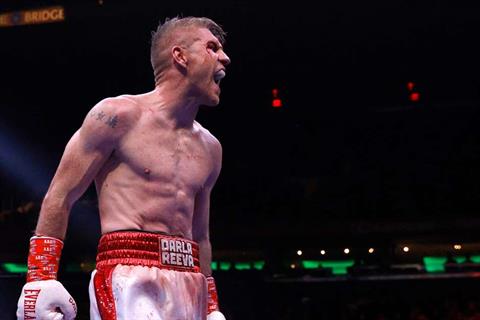 
Liam 'Beefy' Smith said he will "fight anyone" after beating Jessie Vargas at Madison Square Garden on Saturday (April 30).

The light-middleweight from Liverpool was in top form in New York, largely dominating Vargas before the fight was eventually stopped in the 10th round.

The crowd were mainly in the corner of Smith, with the fight part of the undercard for Katie Taylor's victory against Amanda Serrano. Speaking to Matchroom Boxing after the win, Smith was grateful for the support he received, though admitted he was not entirely satisfied with his performance. "Obviously it feels good," he said. "The whole occasion, the whole set-up, the reception I got in Madison Square Garden is one I'll never forget. "It was not the greatest of performances to be brutally honest with you… but I said I'd break him and even though as I said, I wasn't up to scratch early on, I knew I'd get to Jessie and size would play a big part in it. "He was slower than I thought. I thought he'd be very sharp early on and he was slower, but I was just waiting too long and when I got there to throw, he was just naughty with his head, he just come straight in. "I'm surprised I was only cut twice as there was some bad clashes of heads in that fight. I just couldn't really get off early doors until he slowed."

The 33-year-old was asked if his cuts may have given Vargas some extra motivation as he fought back later in the contest. "Yeah it did," Smith said. "Obviously anyone sees a bit of blood and you get a second wind, but I hit him with a body shot in seven or eight that he felt that. I think towards the end of nine he was on the verge of going, to be fair to him he aimed at a body shot, it was just a weird one that hurt me, so I just had to regroup a little bit. "Then the bell went, and then round 10 I just put it right back on him, and I heard the referee saying to him 'show me something Jessie'." When asked about what could be next for him, Smith refused to focus on one name, but put out more of an open challenge, saying: "I've always been open to any fight.

I've chased names for years so it's pointless me mentioning [Kell] Brook, mentioning [Chris] Eubank. "My phone's always on so anyone wants to fight, I've got my gumshield in my bag, I'll fight anywhere." Elsewhere, Shakur Stevenson took Oscar Valdez's WBC junior lightweight title by unanimous decision at the MGM Grand Garden in Las Vegas. The win was the 18th of Stevenson's undefeated career, and despite an even first few rounds, rarely looked in trouble after countering an overhand left to drop his opponent in the sixth. Taking advantage of the moment, Stevenson chose his post-fight interview to propose to his girlfriend, rapper Young Lyric, who said yes.