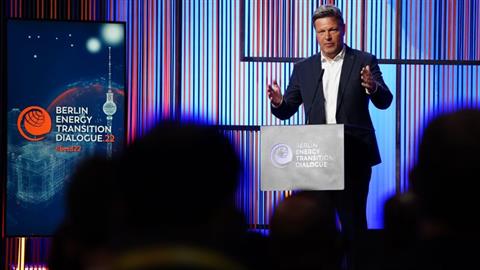 While gaining independence from Russian bicarbonate fuels is underway, the Germans have turned towards importing a new kind of molecule to fuel their industry and chemical processes: green hydrogen, created by splitting water into hydrogen and oxygen through electrolysis. “The expansion of green hydrogen production and application will serve the common long-term goal of driving the ramp-up of green hydrogen, making it commercially viable,” explained Habeck. Ensuring the ramp-up of green hydrogen production and applications has also become one of the missions of Habeck’s colleague, Foreign Minister Annalena Baerbock, who had been championing a concept of “hydrogen diplomacy” in parallel with more in-depth energy partnerships administered by the foreign and economy ministry. “As part of our energy partnership with India, we have agreed to work together in more depth on developing innovative solutions for sustainable green hydrogen production. An important milestone in reducing our dependence on fossil fuels,” he added. Citing India’s fortuitous location for producing renewable energy, India could become a global player in exporting green hydrogen, Habeck’s economy and climate ministry explained in a press release.

The cooperation agreement aims to establish a task force to promote the creation of a close network between the government, industry and research institutes of both countries. Furthermore, a roadmap with specific joint measures to support the market ramp-up of green hydrogen will be developed. Additionally, the task force will work on exchanging know-how on hydrogen regulation, norming, safety procedures and sustainability criteria- a project the EU continues to work on as well. Whether this exchange will entail an export of rules from the world’s largest single market to the rising global power of India is uncertain.