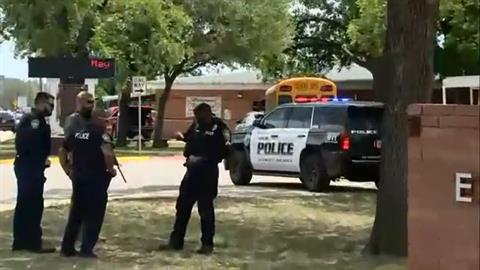 Abbott said Romas shot his grandmother before he went on the shooting rampage around 11:30 a.m. at Robb Elementary School, where second through fourth graders attend.

Two law enforcement officers were shot but are expected to be OK, Abbott said.

University Health officials said a 10-year-old girl and a 66-year-old woman were being treated at University Hospital and were in critical condition.

“Texans across the state are grieving for the victims of this senseless crime and for the community of Uvalde,” Abbott said. “Cecilia and I mourn this horrific loss and we urge all Texans to come together to show our unwavering support to all who are suffering. We thank the courageous first responders who worked to finally secure Robb Elementary School. I have instructed the Texas Department of Public Safety and the Texas Rangers to work with local law enforcement to fully investigate this crime. The Texas Division of Emergency Management is charged with providing local officials all resources necessary to respond to this tragedy as the State of Texas works to ensure the community has what it needs to heal.”

Arredondo said that families of the victims were being notified.

A news conference on what police know about the shooting in the Hill Country community located about 85 miles west of San Antonio is scheduled for 5 p.m.