Not quite armageddon: A large asteroid is whizzing by Earth this week
X

Gegli news - Not quite armageddon: A large asteroid is whizzing by Earth this week 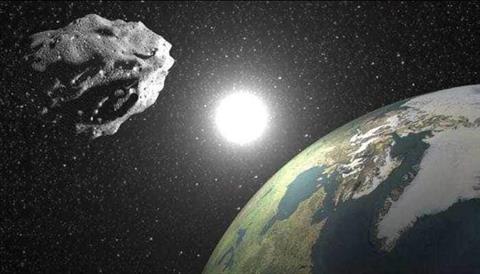 
The 1.1-mile wide asteroid will pass closer to Earth than any other large asteroid this year

it is the nightmare that launched a thousand disaster movies: What if a giant object from outer space, like an asteroid or comet, smashed into Earth and caused an extinction-level event? Whenever a celestial contender emerges from the cosmos, humanity pays attention, as happened when an asteroid approached Earth during the 2020 election season (it was never a threat) or when one large enough to wipe out a country just missed us (that happened in March last year). Now an asteroid that is four times longer in diameter than the Empire State Building is approaching our planet. If it struck, calamity would ensue. RELATED: Astronomers discover a pair of young "twin" asteroids, barely older than the United States Though it is not expected to strike, its size — and the nearness with which it will pass Earth — means that astronomer and space agencies are keeping eyes on it. The barren behemoth is known as 1989 JA, or 7335, and is expected to miss us by roughly 10 times the average distance between Earth and the Moon, according to NASA's Center for Near Earth Object Studies (CNEOS). That amounts to 2.5 million miles, more than enough to put at ease the minds of people who got nightmares over "Deep Impact" and "Armageddon." Yet that comfort comes with a caveat: The NASA scientists acknowledge that because 1989 JA is so massive (it has a diameter of 1.1 miles) that they cannot responsibly wave it off. It is therefore being classified as "potentially hazardous"—  because with any unexpected change in its orbit, or if its orbit were miscalculated, it could suddenly become deadly.

When 1989 JA whirs past Earth later this week, it will do so at a speed that would make the most able Western gunslinger blush, barreling toward our planet at approximately 30,000 miles per hour.

"To provide some context, that is 17 times the speed of a bullet through the air. At this speed, the asteroid could travel around the planet Earth in 45 minutes," Franck Marchis, chief scientific officer telescope company Unistellar and senior planetary astronomer at the SETI Institute, explained to USA Today. As the asteroid approaches at this dizzying speed, astronomy fans will be able to view it live-streamed through telescopes in Chile and Australia. If a worst-case scenario transpires and human beings need to protect themselves from a killer asteroid or comet, such as the one that is believed to have wiped out the dinosaurs, humanity would not be without hope. In November NASA launched a spacecraft called DART, or the Double Asteroid Redirection Test, to collide with a pair of harmless asteroids named Didymos (nearly 800 meters wide) and Dimorphos (roughly 160 meters wide). Using the "kinetic impact" approach to protecting people from asteroids, DART is designed to deflect parts of these asteroids away from Earth's gravitational pull. The sections of the asteroid that remain should be small enough that they will burn up harmlessly in the planet's atmosphere.

In a similar vein, a group called the B612 Foundation exists to keep tabs on all celestial objects that could pose an existential threat to life on Earth. "Here is a problem that is a very solvable," Danica Remy, President of B612 Foundation, told Salon. "When you think about big global problems a lot of them are not going to be as easy to solve, certainly from changing human behavior to the political agendas, but [asteroid impact] is smaller compared to famine or war or climate change." The B612 Foundation is contracting out computational capabilities to help model asteroids' future trajectories. As Remy explained: "when you're talking about modeling let's say 10,000 objects, and you have all of these different factors that our solar system factors in, you need that kind of computational capability to model those moving objects out over 10, 20, 40, 50, or 100 years."